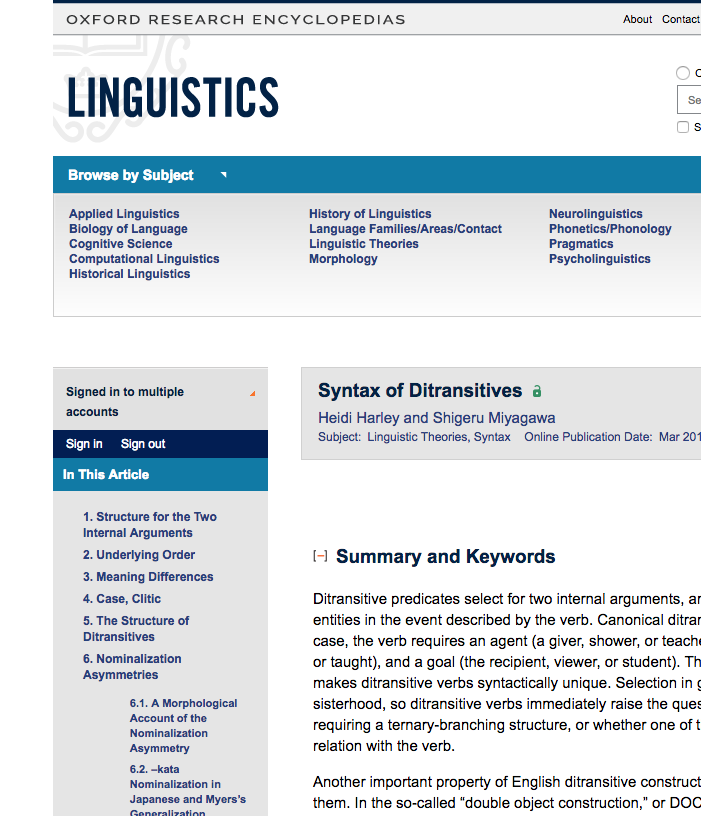 Ditransitive predicates select for two internal arguments, and hence minimally entail the participation of three entities in the event described by the verb. Canonical ditranstive verbs include give, show and teach; in each case, the verb requires an Agent (a giver, shower or teacher, respectively), a Theme (the thing given, shown or taught) and a Goal (the recipient, viewer, or student). The property of requiring two internal arguments makes ditransitive verbs syntactically unique. Selection in generative grammar is often modelled as syntactic sisterhood, so ditranstive verbs immediately raise the question of whether a verb might have two sisters, requiring a ternary-branching structure, or whether one of the two internal arguments is not in a sisterhood relation with the verb. Another important property of English ditransitive constructions is the two syntactic structures associated with them. In the so-called “Double Object Construction”, or DOC, the Goal and Theme both are simple NPs and appear following the verb in the order V-Goal-Theme. In the Dative construction”, the Goal is a PP, rather than an NP, and follows the Theme, in the order V-Theme-to Goal. Many ditransitive verbs allow both structures (e.g. give John a book/give a book to John). Some verbs are restricted to appear only in one or the other (e.g. demonstrate a technique to the class/*demonstrate the class a technique; cost John $20/*cost $20 to John). For verbs which allow both structures, there can be slightly different interpretations available for each. The detailed analysis of these questions has led to considerable progress in generative syntax. For example, the discovery of the hierarchical relationship between the first and second arguments of a ditransitive have been key in motivating the adoption of binary branching and the vP hypothesis. Many outstanding questions remain, however, and the syntactic encoding of ditransitivity continues to inform the development of grammatical theory.