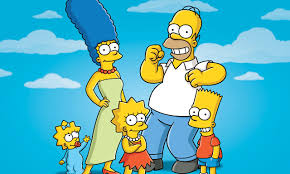 And here’s this year’s! Can’t believe I’m still doing this. But those guys are still puttin’ out the funny… My personal favorite this year: Homer’s coordination contortion in “Mona leaves-a”. Close second: Bart and Lisa’s fun with quantifiers in Any Given Sundance.

Principal Skinner: At the end of the month we’ll be participating in the Vice President’s Assessment Test.
Nelson (standing up in audience): He stinks!
Principal Skinner: We’re assessing you, not him!
Nelson: Withdrawn.
Principal Skinner: The VPAT is part of the federal government’s “No Child Left Alone” Act. It will be a rewarding day of pencil-sharpening and eyes-on-your-own-paper-keeping.
Superintendent Chalmers: Cut the horse-bull, Seymour. Your scores on this test will determine how much money this suck-shack gets for years to come.

Superintendent Chalmers has just told Bart he received 100% on the practice federal VPAT test by writing SLURP MY SNOT on the bubble sheet.

Lisa: How did I do?
Chalmers: 96.
Lisa: What did I get wrong?
Chalmers: Several answers.
Lisa: Several? That’s more than a few! Almost a bunch!

All the supposedly perfect scorers on the VPAT (Bart, Nelson et al.) find themselves on a bus that they think is headed for a special treat…

Principal Skinner: Let me explain this to you in terms even the simplest will understand. We’re hiding you in Capital City for the day so your numbskullery won’t drag down the test scores of the children who ARE our future.

The emcee is onstage introducing the final competition in the crossword contest, between Lisa and Gil.

MC: (Brightly) We’re down to our final two constestants. (Soberly) But before they compete, we would like to pay tribute to all the words that have been removed from the dictionary in the past year.

(Lights dim, mournful Oscar-style strings swell, as words begin to flash on the screen, with pauses between them for applause in tribute for all these words have contributed):

Lisa, upset with Homer for betting against her in the crossword competition, has found a message, “Dumb dad sorry for bet” embedded in the NY Times crossword.

Lisa: Wow. It’s almost as if Dad planted that nessage. No, it just must be a weird coincidence. But what if it’s not? Oh, it must be! Or musn’t it not?

Marge’s St. Patrick’s Day cupcakes have been rescued from a crowd of ravening urchins by a kindly Irish passerby, Patrick Farrelly.

Marge: Well, Mr. Farrelly, the least I could do is offer you a cupcake!
Farrelly (tasting cupcake): Light, moist, and such a marvellous shape retention! Marge, I own a small bakery. Will you bake for me?
Marge: Me? A professional baker’s employee? Imagine how different my life would be! (She imagines dropping Bart and Lisa off at school. The back of the car is filled with cakes in boxes.) I’ll do it!
Farrelly: Bless your heart, you won’t regret it!
Marge: I already don’t!

The arrested rioters from the non-drinking St. Patrick’s Day parade are being brought before Judge Snyder to have their bail set.

Flanders has protected bounty-hunting Homer from getting shot when he’s attempting to bring Snake in for jumping bail. Homer sees an opportunity.

Homer: We should be bounty hunters together! You’re kind and smart, I’m cruel and strong! Together, we’re nothing. But together, we’re the perfect bounty hunter!
Flanders: Well, I could use the money. But you have to promise me something, Homer!
Homer: Sure, what is it?
Flanders: We have to do everything by the book!
Homer: And you have to promise no diddleys or doodleys!
Flanders: My friend, you have a dealarooney!

The Simpsons are at the mall, where they’ve bought sweaters for Bart and Lisa at Itchy ‘n Scratchy’s Sweaters, Not the Fun Cartoon. They’re mad, scratching themselves furiously, as the family leaves the store.

Lisa: Mom, you tricked us!
Bart: We thought this was gonna be a fun trip to the mall!
Marge (trying to emphasize the good side): We listened to music radio in the car!

Homer is lying in bed depressed after his mother’s funeral.

Marge: C’mon, Homie! Your mom wouldn’t have wanted you to stay in bed forever!
Homer: I’ll tell you what she didn’t want! Me to be a jerk to her and then she dies!

Homer: Apu, what do you think happens after you die?
Apu: Manjula will sell the store, dye her hair blonde, and marry my cousin Jangular.
Manjula (in background): Yes! I will!

Nelson is investigating Martin Prince’s untimely death, and has identified Bart and Lisa as possible suspects. He innocently runs into them in the Kwik-e-mart, and starts rambling, Columbo-style:

Nelson: Afternoon!
Bart and Lisa (nervous babble): Taaa
Nelson: Doing a little shopping, eh? Shop-pin’ at the Kwik-e-mart. I like how ‘quick’ is spelled with a ‘k’. It’s a quicker way of spelling “quick”!

Kent Brockman is interviewing Chief Wiggum at the scene of Martin Prince’s supposed death at the foot of a cliff in Springfield National Forest.

Chief Wiggum: According to this pocket protector, the victim’s name is Martin Prince. Sadly, his pocket was protected, but nothing else. And we know exACtly who is to blame! [Bart and Lisa, watching on the couch at home, cringe in fear]. Noone! The boy clearly fell by accident!

A cougar coughs up Martin Prince’s torn and tattered shirt. Chief Wiggum picks it up with a stick.

Chief Wiggum (to Lou): Do you think this would fit little Ralphie?
Lou: Chief, that’s evidence!
Chief Wiggum: I know. But after it’s evidence, it’s a shirt again, innit? (Tucks shirt in pocket)

Bart is auditioning to be a Krusketeer, and his act is going over very well. The crowd is applauding and cheering.

Sideshow Mel’s narrative voiceover: Over the years, show business has been home to scoundrels and saints, thespians and harlequins, abbotts and costelli.

Homer: What childbirth is to women, eating trunk meats is to the bewangèd.

A roving brand of movie mucky-mucks have seen Lisa’s Sundance movie (Capturing the Simpsons) and want to distribute it. They approach Superintendent Chalmers and Principal Skinner, whose company ‘Chalmskinn productions’ got production credit:

Homer has dressed up in a cow suit to save Bart’s 4-H steer Lou from being taken to the feed lot. They’ve loaded him into the truck instead of Lou and are driving him away. But, through the eyeholes in his cowsuit, Homer sees the FEED LOT sign going by — they’re not stopping! Next he sees LAUGHTER HOUSE.

Homer: Oooh, Laughter House! With the world in the shape it’s in, we could all use some comedy!

The camera pulls back to reveal the initial S — SLAUGHTER HOUSE.

(Even the title of the episode has fancy derivational morphology)

Homer is narrating a romantic story for Marge:

Marge is telling the story of Shady and the Vamp, a story of canine love that breaks class barriers. Shady has taken the Vamp out for spaghetti at Luigi’s, and she’s stolen some spaghetti from him.

Shady: You’re pretty feisty for an upper-class bitch!
The Vamp: I like that you used the technical term for a female dog!

Willie the dogcatcher has captured Shady and the Vamp’s two puppies.

Willie: You strays are going straight to the pound, where you’ll be put to sleep….by my boring stories! And then you’ll be killed.

Lisa: That’ll be thirty dollars.
Mayor Quimby: For three boxes?!
Lisa: The money helps us serve the community…(counts off on fingers, list intonation) plant trees, pick up litter, cut up milk bones for old dogs…
Mayor Quimby: It was a rhetorical question!
Lisa: And I used rhetoric in my answer!

Lisa: Hey dad! That’s that singer you used to manage!
Bart: Oh right! Dad was Colonel Homer and he wore that awesome suit and Lurleen wanted to bunk his brains out!

More rhetorical questions, constructional meaning of ‘how could’

Homer and Marge have just learned that Lurleen’s dad walked out on his family when she was a child.

Marge: So that’s it! She’s been burned by the most important man in her life — her father!
Homer: [disgusted intonation] How could a man just abandon his family? By which I mean, what is the method he would use, and could anyone do it?

Marge is confronting Lurleen’s father, who answers the door wearing a weathered t-shirt reading ‘No Child Support’ and holding a bowl of cereal:

Marge: Hello, are you Royce Lumkin?
Royce: That’s right.
Marge: Father of Lurleen Lumkin?
Royce: Lurleen?! (Lip trembles) I ain’t seen my little girl in thirty years! She must be what, twelve, thirteen by now?
Marge: She’s thirty-four! And she’s having a rough time!
Royce: Oh, man. I better whiskey up these corn flakes. (Pulls out a hip flask, pours into his cereal).
Marge: She needs to see you right away!
Royce: Oh, man. I better heroin up this orange juice! (Stoops to pick up a glass of juice and a syringe.

Lurleen has written a song for her father, and in the chorus she rhymes as follows:

Marge is showing Lisa her box of Shattered Dreams (which she keeps in her Disappointment Closet).

Homer: This can only mean one thing! Flanders, you ate my jerky!
Flanders: As the oak said to the beagle, you’re barking up the wrong tree! I spent the whole morning blacking out the goshes and darns in these Hardy Boys books!
Homer: I know you ate my jerky! Just like I ate your earthquake supplies!
Bart: Dad, look, raccoons!
Homer (menacingly, to Flanders): You stay right there!
Flanders: Okeley dokeley! (Sits and opens The mystery of the odd-shaped rock. Reading to himself:) “Aw!” “Heck!” “Darn!” I don’t think so! (Deploys black marker).

Retronymy:
Lisa’s been taking ballet lessons, and has gotten hooked on secondhand smoke during breaks. It’s a windy day, though, and she can’t catch enough of her classmate’s exhales to get a hit.

Lisa: Oh, what am I thinking? I don’t need secondhand smoke to do ballet! (Sees smouldering butt on ground, picks it up.) I need first-hand smoke!

Double, Double Boy in Trouble. 2008. Towards very end of episode, Bart is reunited with his family.

I may have just had a blinding flash of light concerning Hiaki echo vowels, which I have to write down […]

For the prelim class last week, I happened to read in quick succession Chapter 2 of Richards’ ‘Uttering Trees’ and […]

Today Maria gave us a super clear scope judgement about the Hiaki word ‘nothing’. We were trying to get ditransitives […]

…on p 933, after arguing for a clausemate restriction on the Person Licensing Constraint (person features must agree with an […]

Reading Roberts (2010) for my seminar on head movement, I learn this! “…The auxiliary associated with the restructuring verb can […]

Just learning my way around my new website! I’ll use this blog to make notes on thoughts I’m having, to announce […]